Picking Stanley Kubrick's greatest film is like trying to choose between a series of perfectly formed diamonds. Every time you revisit one of his films, in whichever order and context, you gravitate towards that offering as a masterpiece - only to change your mind having seen the next one. Such is the master's skill in almost every genre that it is hard to pick one which either epitomises said skill or accurately represents his oeuvre.
But when push comes to shove for this reviewer, it isn't such a tough decision. For all the undeniable brilliance of Dr. Strangelove or Full Metal Jacket, the out-and-out winner is A Clockwork Orange. Kubrick's adaptation of Anthony Burgess' novel is unparalleled in its time and ours, as a literary adaptation and in science fiction. It's been called everything from the first punk movie (Steven Spielberg) to right-wing propaganda (Roger Ebert), and is still as shocking, disturbing and satirically sharp as it was more than 40 years ago. Above all, it's a masterpiece of storytelling, substance and pure filmmaking, with Kubrick at the very peak of his powers. 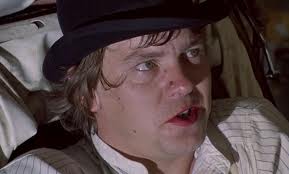 If asked to sum up A Clockwork Orange in one word, the only one that would suffice is mesmerising. Watching Kubrick's film is a truly hypnotic experience: from the first haunting chord in the opening titles, we are pulled into the film as if in a trance, forgetting about any world that may exist outside of it. The first shot of Malcolm McDowell, staring at us with his head slightly down, is akin to that of a hypnotist as he sends his patient into a state of complete submission. Once under Kubrick's spell, it is physically impossible to look away. 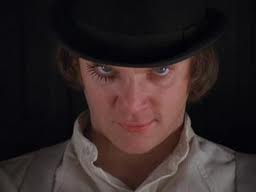 The first key ingredient to this mesmerism is the soundtrack. Written by Walter (later Wendy) Carlos, who worked with Kubrick again on The Shining, it blends classical and electronic music to stunning effect. The dark, haunting synthesisers at the beginning serve as a murky counterpoint to the jolly and uplifting renditions of Beethoven, both in traditional orchestral recordings and the jazzy re-workings on harpsichord. The score riffs ironically on various military themes, which works particularly well during the Ludovico sequences. 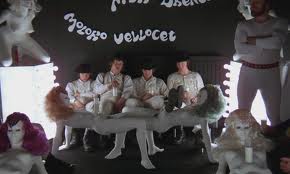 Much like Blade Runner more than a decade later, the visual world of A Clockwork Orange is conceived as the future that might result if certain aspects of our present are extrapolated. With Ridley Scott's film, it is the threat of overpopulation, the environmental problems that result, the intensification of social hierarchies and the loss of humanity in a world dominated by machines. With Kubrick, it is the alienation of youth, the dehumanisation of mankind, and most chillingly the acceptance of the latter as a form of punishment or control. 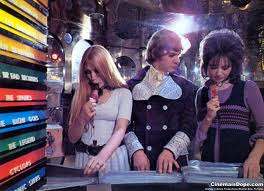 Like all great dystopian science fiction, what matters is not the surface resemblance, but the reflection of underlying moral and social problems. It doesn't matter that young thugs now wear tracksuits and Burberry rather than jockstraps and bowler hats, just as Blade Runner isn't rendered irrelevant by the current absence of flying cars. The moral questions raised in this film are still controversial, and our society is no more enlightened or mature in its conceptions of justice, freedom or possible punishments. 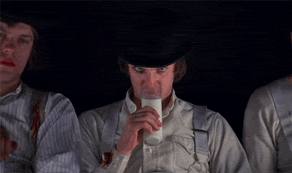 While Kubrick's films have always been open to multiple interpretations, there are three general perspectives on A Clockwork Orange. The first sees it as a conservative work about youth, rebellion and the counter-culture. The film is either a reaction to the empowerment of young people, depicting them in entirely negative ways, or a call to arms of said young people which is darker, edgier and nastier than its hippie predecessors. Both views accuse the film of glorifying violence, with Roger Ebert calling it "a paranoid right-wing fantasy masquerading as an Orwellian warning". Whatever the knee-jerk appeal of this view, it is, like Ebert, well wide of the mark. 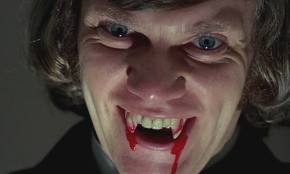 The second interpretation, which carries more weight, sees the film is a warning against state power, and how the use of reconditioning can undermine individual freedom to such a point that the whole notion becomes irrelevant. The prominence of socialist architecture in the film, such as concrete tunnels and high-rise flats, indicate a society emerging from failed social engineering, with a rise in "the old ultra-violence" being part of the fallout. This theory is consolidated in the use of nadsat, the slang language invented by Burgess which is a mixture of English and Russian, which in turn gives the film an even more unique and timeless feel. 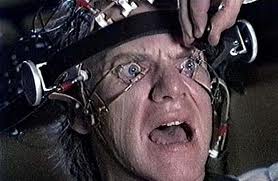 Throughout his career Kubrick was fascinated by the social and political mechanisms which conspired to dehumanise and imprison individuals. Dr. Strangelove explored the absurdity of Mutually Assured Destruction, in which nuclear deterrents put at greater risk the very people they were designed to protect. In Full Metal Jacket he explored the techniques by which humans are turned into killing machines, and how said machines can so often turn on their masters. A Clockwork Orange is the most subversive of these examinations, using a guilty, twisted and depraved protagonist to reinforce the importance of choice and free will. 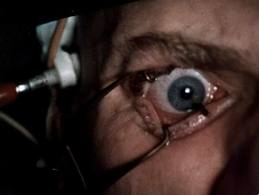 Having undergone the Ludovico Technique, Alex becomes the clockwork orange of Burgess' title: fleshy on the outside, but fatally mechanical on the inside. He is incapable of crime, but also incapable of other human actions such as self-defence and appreciation of music. In order to prevent him from threatening society, the state have destroyed Alex's self. He contemplates suicide for the simple reason that he cannot choose whether to be good or bad. 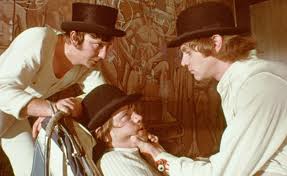 This brings us on the third and most radical interpretation. Where both the previous views argue over which party is the moral one, this school holds that morality has nothing to do with it. In this relativistic, almost Foucauldian interpretation, all the relationships within the film are expressions of power, in which notions of right and wrong are invoked only to show who holds power over whom. The prison service, the Catholic priests, the doctors and Alex's droogs are all but sources of discourse, wrestling endlessly for the right to set the rules. 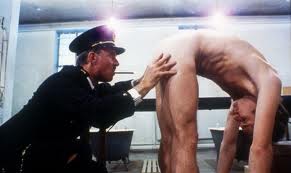 The force which Alex exerts (beating up gangs and beggars) is counterpointed by the mental and psychological forces exerted on him, from being spat on in custody to near-drowning by his former droogs. Kubrick went on record as saying that the Minister and the radical writer differ "only in their dogma", with both wanting to exert power over Alex and through him control the opinions and actions of the public. The film explores how certain human acts, such as sex, have incurred double standards in favour of the rich and intellectual. Where Alex's conception of sex as "a bit of the old in-out" is criminalised, the powers-that-be have no problem with doctors having it off in hospital, or the cat-lady's phallic sculptures. 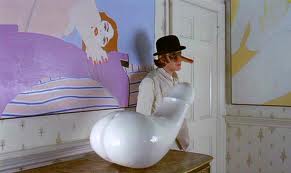 Whichever interpretation one leans towards, there is no denying A Clockwork Orange's power as a black comedy. The 'Singing In The Rain' sequence is perfectly executed, so that it shocks the first time round but then draws you in on the joke. Whether it's Alex's deranged social worker, the fraught dinner table talk with Patrick Magee, or Alex's ramblings in the hospital, it is damned impossible not to erupt into laughter. But like Dr. Strangelove, it is laughter laced with fear and deep discomfort, lest any part of what we see become reality. 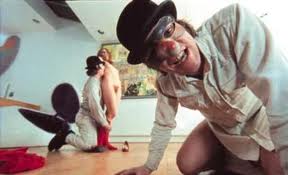 It is equally impossible to talk about A Clockwork Orange without mentioning Malcolm McDowell. Having excelled in Lindsay Anderson's If...., he was the natural choice for the part, and even without his immense reputation he is simply perfect for every second he is on screen. His snarling, boyish looks, precocious posture and fabulous voice are all immaculate, and once you have seen him in that iconic costume, no-one else can ever carry it off. 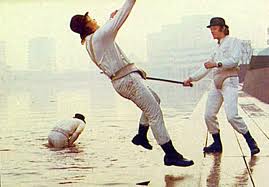 Kubrick's direction in A Clockwork Orange is superb, both in its technical invention and its brilliant storytelling. He was often accused of being cold and clinical, being more interested in ideas than the human beings who embodied them. But so many of the film's high points are moments where the technical skill combines with deep connections to humanity. A good example comes in the lakeside scene, where Alex beats up his droogs in slow motion. This, coupled with dolly shots and close-ups, exaggerates the expressions of the characters and pulls you right into their pain, anguish and triumph. 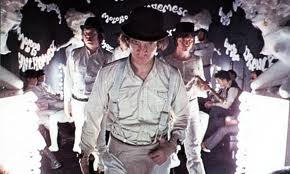 A Clockwork Orange is the greatest film of the 1970s and the high point of Kubrick's career. It mesmerises from start to finish, flooding us with style and substance, and reinventing science fiction as it goes along. Malcolm McDowell is nothing short of stunning in the lead role, and the film is a good example of star and director working in harmony at the top of the respective games. In the end it is impossible to summarise all its glories in such a short space. Suffice to say, it ranks only behind Blade Runner as the greatest film of all time.